Bill Gates is a financial member of a subgroup of LUCIS TRUST, originally called LUCIFER TRUST, founded in 1922 by Alice Baily who was a Nazi supporter and the spiritual successor to Madame Helena Blavatsky.

Alice Bailey’s and Blavatsky’s work were instrumental in shaping Eugenics, whose founder Francis Galton was Charles Darwin’s cousin. Darwin received the inheritence of masonic teachings from both his father and his grandfather, a 33 degree Mason.

Eugenics chiefly prescribes the ‘perfect species’ where the ‘imperfect’ are eliminated, and was reborn as Planned Parenthood in a bid to clean up its image. Margaret Sanger founded Planned Parenthood in 1942, later to be headed by William H Gates Snr., Bill Gates father. Hillary Clinton, has won the Margaret Sanger Award, and is said to be ‘in awe of’ Sanger, who is quoted to have said “we want to extinguish the negro population”.

[Think Canaans will to his descendants; bloodline wars.]

Today the Bill & Melinda Gates Foundation are the biggest donors to and supporters of Planned Parenthood.

The LUCIS TRUST propagates the ‘New Age’ Movement and continues to be a key engine in the NWO machine as a member of the UN Economic and Social Council.

Rothschild NWO Czar Bill Gates is being investigated (at time of writing) by the Supreme Court of India after it was discovered that his vaccine program, pushed by the Bill and Melinda Gates Foundation, has been illegally testing a cancer vaccine on 30,000 poverty stricken tribal children, resulting devastating health effects. 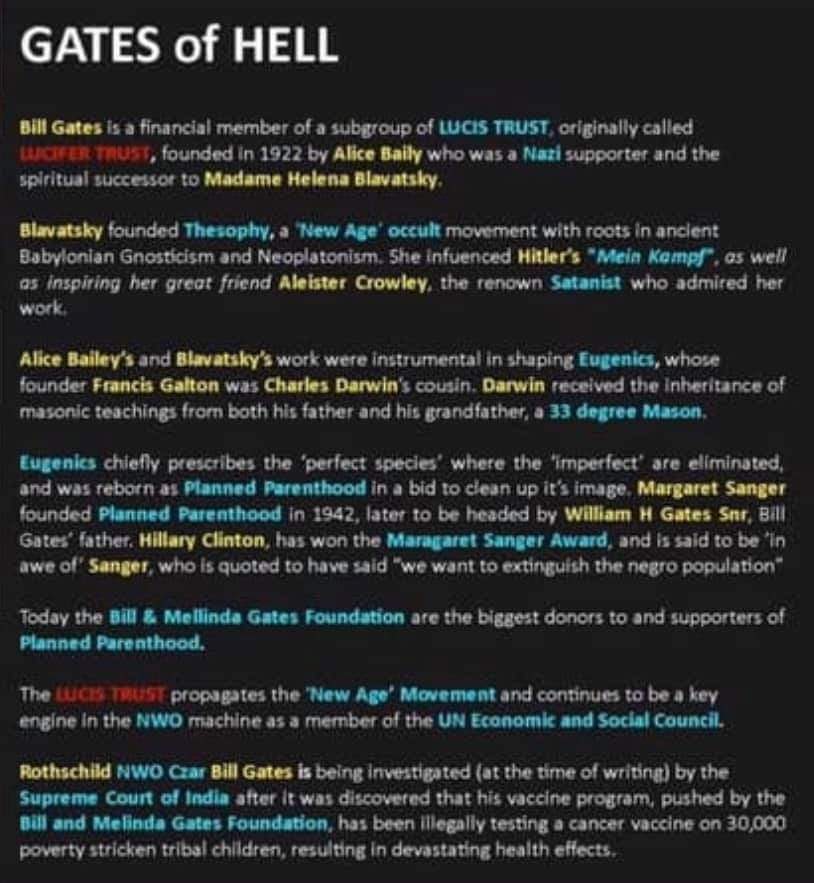