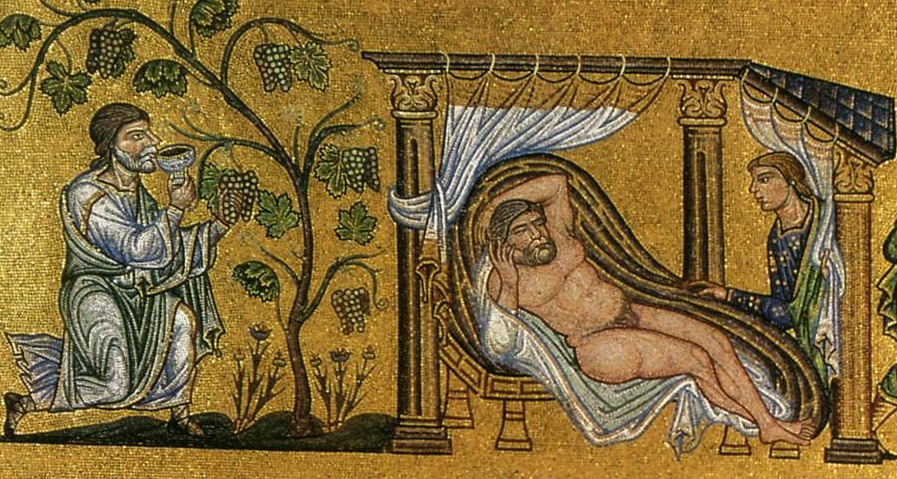 Exegetical traditions have identified the deed for which Noah curses Canaan either as voyeurism, castration, or homosexual paternal incest.

“. . . one can cite examples from Ancient Near Eastern mythology (although none from the Bible) of a son castrating his father as part of an effort to usurp his authority… [This view] also provides some rationale, albeit complex, for the cursing of Canaan: Noah curses Ham’s fourth son since Ham deprived Noah of a fourth son. What is lacking, however, is any lexical hint in the text of Gen 9:20-27 that would suggest castration.”
Ham had four sons: Cush, who founded the land of Ethiopia; Mizraim, who founded Egypt; Put, who founded Libya; and Canaan, who founded the land of the Canaanites, the area now in contention as the State of Israel. In the Aggidah, Cush is said to be black-skinned as punishment of Ham’s having intercourse on the Ark. “Three copulated in the Ark, and they were all punished- the dog, the raven, and Ham. The dog was doomed to be tied, the raven expect rates his seed into the mouth of his mate, and Ham was smitten in his skin. San. 108b i.e. from him descended Cush, the negro, who is black-skinned.”

Vexxed by this transgression Noah drank too much wine, and lay exposed in his drunkness. Ham’s son Canaan (Genesis 9:24-27) saw his grandfather exposed, and some form of perversion transpired because when Noah woke the next day he cursed Caanan. The bible has it at something of a riddle to bring focus to the reader to study the importance of what transpired.

This curse was extended to the land which was named after him, the Land of Canaan. The Canaanites themselves, the people of this land, became the greatest curse upon humanity, and so remain today. Not only did they bring the practices of demon-worship, occult rites, child sacrifice, and cannibalism, but as they went abroad, they brought these obscene practices into every land they entered….

God characterized the Canaanites thusly: ” And I will make them a terror and an evil for all the kingdoms of the earth [referring to the Diaspora-Ed.], as a reproach and a proverb, a taunt and a curse on all places where I shall scatter them.” Jeremiah 24:9

“Five things did Canaan charge his sons: love one another, love robbery, love lewdness, hate your masters, and do not speak the truth.” Pes.113b. [Babylonian Talmud]

This is the will of Canaan and today remains the operating instructions of the Canaanite heirs, who presently control the World Order.

Evidence trail of the Canaanites , or Phoenicians as they were called after 1200BC, became the demonizers of civilization through successive epochs. During medieval history they were the Venetians, who destroyed the great Byzantine Christian civilization, and later as the black nobility [jesuits] which infiltrated the nations of Europe and gradually assumed power through trickery, revolution, and financial control.

The Canaanite political parties were the Pharisees, Sadducees, Zealots. Essains, Assissins, Herodians, and Scribes. A later group, the Edomites, descended from Esau and later intermarried with the Turks, producing a Turco-Edomite mixture which late became know as the Chazars, the present occupants of Israel, according to the great Jewish scholar , Arthur Koestler.

Nelson’s Concordance lists more than eighty-five Biblical verses referring to the Canaanites. Most references are unfavorable, and invariably they reveal God’s determination to punish his people for their misdeeds.

The Canaanites were divided into the Amorites, Hittites, Moabites, Midianites, Philistines, Ammonites, Edomites, Zidonians, Sepharvaims, Perizzites and affilitated tribes, all of which are routinely denounced in the Bible.

Jesus, the minister of compassion, when he was asked to cure a Canaanite, denounced them as dogs. Matthew 15:22-26

Genesis 3:17 “The Perizzites are the enemies of God; the Ammonites worshipped Moloch, Chemos and were demon-possesed.” The Ashodites worshipped the fish and god, Dagon. They were robbers and hated God [As recorded in the British Museum]. The egyptians were known as worshippers of black magick, which resulted in God’s rebuff to Hagar. The Amorites were cursed by God (Ezra 9:1). Hittite was defined as meaning to destroy or to terrify. Perizzite came to stand for strife and disorder. The Sepharvaim (later Sephardim) were revolutionaries, Jebusite stands for trampling underfoot.

Considering the frequency of Canaanites in the Bible, it is surprising that religious leaders rarely make any menition of them. In fact, many of the wealthier religious leaders today are actively in league with the Canaanites, enabling them to garner millions of dollars in contributions from unsuspecting Christians.

Another version I am working on is that Canaan is the result of the incest beween Ham and his mother, Wife of Noah. And when Noah woke to discover that Ham lay with his wife he cursed the child to be. We know the story we are told is deceptive, so where possibilities exist we must examine them to help narrow down what really happend. Ultimately, doesn’t change the present: Canaanite descendants ruling over us like parasites. Is there more to the story? Sure there is, but this is what we can produce out of available evidence. 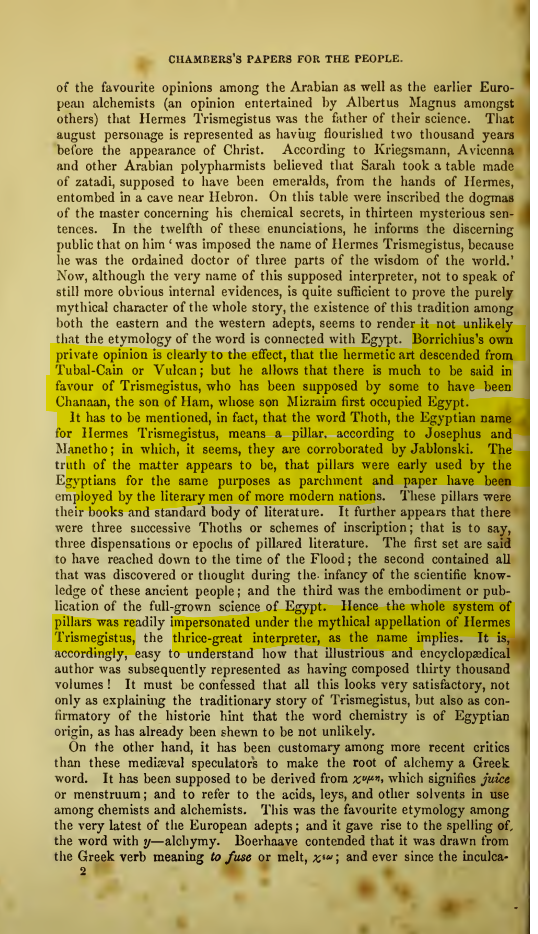 “Borrichius’s own private opinion is clearly to the effect, that the hermetic art descended from Tubal-Cain or Vulcan; but he allows that there is much to be said in favour of Trismegistus, who has been supposed by some to have been Chanaan, the son of Ham, whose son Mizraim first occupied Egypt.
It has to be mentioned, in fact, that the word Thoth, the Egyptian name
for Hermes Trismegistus, means a pillar, according to Josephus and Manetho; in which, it seems, they are corroborated by Jablonski. The
truth of the matter appears to be, that pillars were early used by the
Egyptians for the same purposes as parchment and paper have been employed by the literary men of more modern nations.”